What is a Nebula?

A nebula(plural is either nebulae, nebulÆ, or nebulas) is the first stage of a star's life. It is an interstellar cloud, consisting of hydrogen, helium, dust, and much more ionized gases.

The nebulae were founded by Ptolemy (Claudius Ptolemy), a Greco-Roman mathematician, astronomer, geographer, astrologer, and poet, who was born and died in Alexandria, Egypt. The true nebula was mentioned by Abd al-Rahman al-Sufi in his book called "Book of Fixed Stars". The Orion Nebula was discovered by Nicholas-Claude Fabri de Peiresc with a telescope in 1610. 8 years later, it was observed again by Johann Baptist Cysat in 1618. Later in 1715, Edmund Halley made and published a list of 6 nebulae, and this number increased overtime.

Nebula is formed when the interstellar medium (radiation and matter that exists in space between star systems) go through a gravitational collapse. This allows to create multiple regions of increasing density. 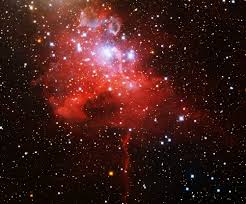