What is a Protostar?

A protostar is an early stage in the formation of a star, where it contracts mass of gases from its parent molecular cloud. It mainly consists of hydrogen gas.

The molecular clouds have molecules derived from a small quantity of previous stars. This protostar lasts for an extremely long time, at 10 million years for a star that is caused by supernovas. This would cause separation, and each of those fragments would collpase under gravity, and eventually form a protostar. 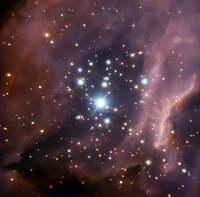